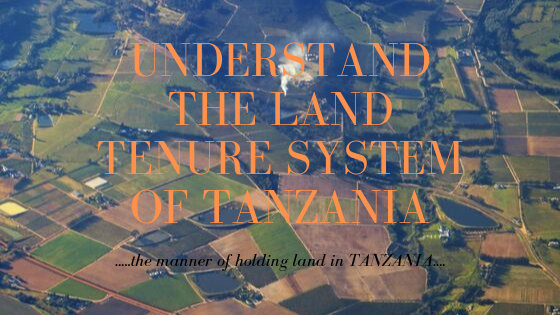 Today I will cover the land tenure system in Tanzania. Here you will learn;

What is a land tenure?

Land tenure refers to a system of holding land. It is how land is held. The land tenure system provides for who can acquire land, how can the land acquired, how long can a person owns the land, and terms and conditions for holding the land.

In Tanzania, the system of holding land passed through different phases but the current land tenure system in Tanzania is leasehold system which is referred to as the granted right of occupancy and customary or deemed right of occupancy while the President is vested powers over the land, and he is a custodian of the land on behalf of all Tanzanians.

Before colonialism, holding land in Tanzania was based on the customary laws of the different tribes. Pre-colonial societies in Tanganyika had customary ways of acquiring and using the land, mainly land was used for agriculture, hunting, gathering, and grazing. To a larger extent land was communally owned.

Acquisition of Land at Customary Law

By Clearing a virgin land

This was a common way of acquiring land during that time. When someone is brought into cultivation any uncultivated land he is termed to own that land in exclusion of others.

One of the ways of acquiring land has been through allocation by the relevant authority. This authority could be the chief, villager headman, or chairperson. In most cases such allocation was accompanied by some restrictions which had to be observed by the occupier breach of those conditions may cause the land to be taken by the authority and given to someone else.

Land Tenure System During the German period in Tanzania

During the German era Ownership of land was vested in the emperor and all land was known as crown land.  No individual was allowed to own land except for lands already in private ownership or possession by chiefs or African communities before German colonial rule.

The main instruments that governed land matter during this time wasThe Imperial Decree of 26th Nov.1895 and 1896 Circular/rules to implement the Decree.

Land grants had to be made by the Government only and all transfers of land from an African to a non-African could not be valid without consent from the Governor, this aimed at safeguarding colonial interests.

Under the Decree and the Circular, occupation by natives was deemed permissive. Their lands were subject to expropriation for freeholds purposely for the settlers.

Transfer of Crown land could be affected through Conveyance of ownership or Lease. Therefore during this era, there were three forms of tenure

Land Tenure System During the British period in Tanzania

The main instrument which governs land matters in Tanzania during the British period was The Land Tenure Ordinance (1923). Under this law all lands whether occupied / unoccupied was declared to be public lands and were under the supervision of the Governor.

After First World War WW1 Tanganyika (Tanzania) became a mandated territory under the League of Nations and was set under the British’s supervision.

During this time Land alienated by Germany was sold as enemy property to the British and a Very small percentage went to Africans. Alienated land continued to be alienated. German freeholds and leaseholds were retained as British freehold and leases.

Land Tenure System in Tanzania after colonialism and up to now

After independence, Tanzania took the spirits of the land Tenure Ordinance (1923) however the word governor was replaced by the word President. Therefore President was vested in power over the land and he became a custodian of the land on behalf of all Tanzanians. This applies up to now.

Also, the Government enacted the Freeholds Titles (Conversion) and Government Leases Act No 24/1963, with the aim to convert estates of fee simple into government leases for 99 years effective from 1st July 1964.

It could be said that the motive for the Government to enact such a law was to assume more control over land as well as being able to regulate and monitor land development.

To date, the main laws which govern land matters in Tanzania are The Land act, No. 4 1999, and the village Lang Act, No. 5 1999. This law provides that all land in Tanzania shall continue to be public land and remain vested in the President as trustee for and on behalf of all the citizens of Tanzania.

It is obvious therefore that, in Tanzania, individuals do not own land rather have interests in land or a term of years, mostly 99 years when expire you have to renew.

An interest in land has value, and such value must be taken into account in a land transaction.

Also, fair compensation has to be paid to any person whose right of occupancy has been revoked or in any way interfered with.

The following are other legal issues you may like to know about in Tanzania. You may read;

Procedures to register a Mortgage in Tanzania

The Historical Perspective of Banking in Tanzania and East Africa